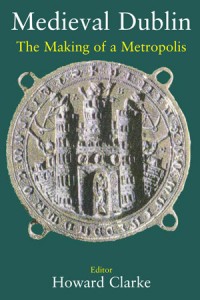 Medieval Dublin:  The Making of a Metropolis (1990)
ed. Howard Clarke

From its origins as a monastic settlement and later as a Viking kingdom, to its identity as an English colonial capital, medieval Dublin passed through many incarnations. It has been, alternately, a pirates’ lair at the center of a brutal slave trade, an emergent town ransacked periodically by its Irish neighbors, a rapidly expanding municipality headed by a mayor, and the principal focus of loyalty to the crown in a beleaguered Pale. 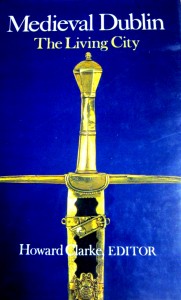 Aubrey Gwynn – ‘The first bishops of Dublin’
A.L. Elliot – ‘The abbey of St Thomas the Martyr, near Dublin’
Charles McNeill – ‘Hospital of St John without the Newgate, Dublin’
Benedict O’Sullivan – ‘The Dominicans in medieval Dublin’
G.J. Hand – ‘The rivalry of the cathedral chapters in medieval Dublin’
Brian Mac Giolla Phádraig – ‘Fourteenth-century life in a Dublin monastery’
M.V. Ronan – ‘St Patrick’s staff and Christ Church’
R.H.M. Dolley – ‘The Dublin pennies in the name of Sitric Silkbeard in the Hermitage Museum at Leningrad’
R. Dudley Edwards – ‘The beginnings of municipal government in Dublin’
H.F. Berry – ‘Catalogue of the mayors, provosts and bailiffs of Dublin City, A.D. 1229 to 1447’
W.G. Strickland – ‘The ancient official seals of the City of Dublin’
A.J. Otway-Ruthven – ‘The chief governors of medieval Ireland’
A.E.J. Went – ‘Fisheries of the River Liffey’
T.K. Moylan – ‘Vagabonds and sturdy beggars: poverty, pigs and pestilence in medieval Dublin’

Currently out of stock

Find at your nearest library 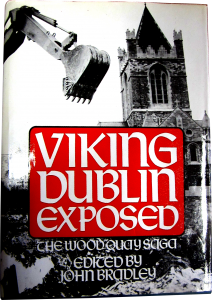 Can't find the volume or article you're looking for? Check out our bibliography page for more sources