Join us on Tuesday, 05 April 2016 for the launch of the latest Medieval Dublin volume 15! 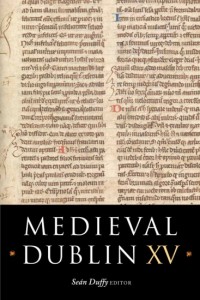 Hot off the presses this volume contains reports on a number of important archaeological excavations in the Dublin area in recent years as well as a hitherto unpublished essay by the late Professor James Lydon on the Scottish threat to capture Dublin during the Bruce Invasion and a report on the exciting recent acquisition of a St Mary’s Abbey manuscript that has finally returned to Dublin after nearly 400 years abroad.