During the conference, experts from all over the world told the story of Brian’s rise to power and tried to answer the question of who really won the battle.

Over 600 people attended this monumental two-day conference, including scholars, students and members of the public.

We would like to thank everyone who attended and all of our speakers for contributing to one of the most significant conferences on the battle of Clontarf to date.

We would also like to offer a special note of thanks to Professor Seán Duffy, Dublin City Council and the Department of History Trinity College Dublin for making this remarkable conference a reality.

Some photos from the conference: 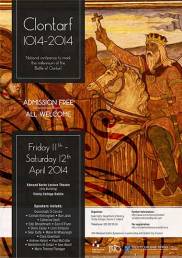 Awaiting the days excitement at FMD Battle of Clontarf conference